Have you jumped on the Dry January bandwagon yet? If you are still on the fence you might change your mind once you see all the benefits. It isn’t news that drinking less has health benefits. Check out these 10 benefits to going dry for January.

How I Decided to Participate in Dry January

A few years ago I gave up alcohol for the month of January. Then did it again the following year. Turns out, I really liked going a month without drinking.

Tarth be told, I don’t just drink too much during the holidays, I drank too much during all of 2019. Life was stressful! I was a caretaker to my mom going through cancer, my son was hospitalized with a health problem, my mom died, I became the guardian for my littler brother, and a few months later we revisited our relationship and he moved in with one of my littler sisters. It was a whirlwind of a year.

Then 2020 became, well, 2020. And even though I started the year strong, the pandemic life had me drinking too much to cope with life again.

I enjoyed being alcohol free for each of my pregnancies and figured it I could do it for 9 months, 3 times, then I could surely eat healthy and abstain from alcohol for 3o days.

When I first did Whole30, I thought not drinking was going to be the hardest part but with so many people doing Dry January, it felt pretty easy to give up drinking for a month. There is something about the solidarity of millions of people taking a break from alcohol at the same time.

Looking for more New Year’s resolutions that can save you money? Read this!

What is Dry January and how did it become so popular?

Dry January is a public heath campaign that started in the United Kingdom in 2013. That first year 4,300 people pledged not to drink for a month. Fast forward to 2017 when popularity spread to the US and more than 5 million people took the pledge.

While the official name is relatively new, the idea isn’t. People have been doing this for years to recover from excess drinking over the holidays. It dates as far back as 1942 when Finish people practiced Sober January as part of the war effort.

You can read the entire history of Dry January in the UK here.

What are the benefits of Dry January?

Wow! There are so many benefits to taking a break from alcohol. Most notably, your health will improve. With someone who just lost a mom and watched a child overcome an illness, I’m all about improving my heath.

If you’re an already pretty healthy person, you may wonder how Dry January can benefit you. That’s why I put together this list of 10 reasons to jump on the Dry January bandwagon. It’s not too late to start or think about for next year. 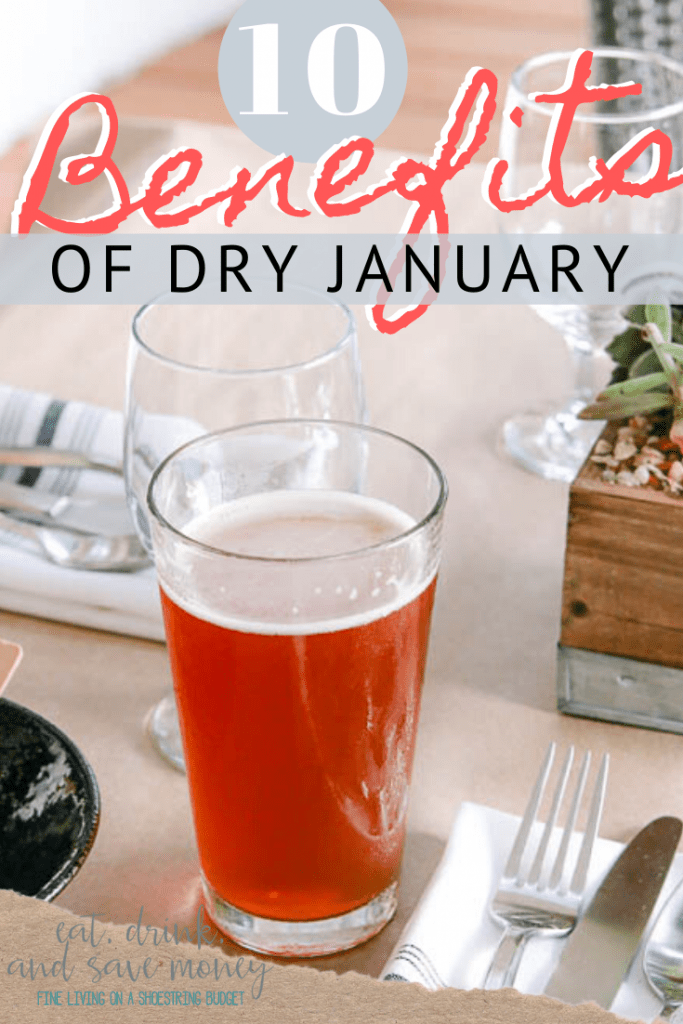 10 Reasons to Give Dry January a Try

Abstaining from alcohol may be a primal instinct

Here’s something pretty interesting: humans are wired to go through periods of fasting.

Every major religion has some aspect of self-denial, or fasting. For example, Christians practice fasting during Lent where we abstain from certain luxuries during the 40 days of Lent.

With an increasingly non-secular society, it’s not surprising that humans gravitate towards fasting as a group. There is power in numbers and it feels so much better to fast with a group as opposed to giving up alcohol by yourself.

If you like this, you’ll love these posts too: