This is a guest post by my friend Mark who shares my hatred for all things Comcast.  He has great tips for becoming a cord cutter.   Now that football is wrapping up, it’s a great time to cancel your cable or satellite.

Mark MacLaughlin is the Online Experience Manager at Audi and Volkswagen of Naples, FL, an Emmy Award-winner and a former child news and sports producer/prodigy. 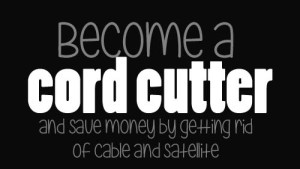 There is magic in the air. Capture it.

We are living in an exciting age; one that has seen our access to digital content expand and become more accessible than ever before. But, do we need all of those programs and talking heads? Furthermore, do we really need to PAY for 400 channels that we don’t watch? The answer is no…and it’s easier to do than you might think.

By now, you have probably heard the term “Cord Cutter.” It refers to a person or household who has decided to get their programming by means other than cable or satellite. By all estimates, cable companies are losing millions of subscriptions every year, and it’s a trend that will only continue to grow as content providers choose different ways to deliver their offerings. Faced with cable/satellite bills that easily reach $150 a month and beyond, what is the consumer to do? My advice? Kick it old school. Grab your fix from the skies and save huge amounts of your hard earned cash. You’ll enjoy the network programming you already watch, in FREE, glorious HD fashion.

Over-the-air programming, while often ignored, has always been there. NBC, CBS, FOX, ABC and your local Pubic Television station are constantly floating around, just waiting for you to grab it in all of it’s free glory. If you’re a child of the pre-Super Nintendo era, you might even remember your parents juggling with a pair of rabbit ears. It was a pain, and often resulted in your kid sister having to stand on her head to get your local weatherman to stop appearing purple. There is great news though! Much like MP3s allowed you to stop doing cassette recordings your favorite songs, advances in OTA television technology have made the no-pay experience better than ever before. Connect in a simple antenna, let your TV search the digital space, and enjoy 15-30 channels of HD in beautiful clarity.

When the FCC ushered in new digital broadcast regulations several years back, it forced your local stations to upgrade their equipment and improve their signal; at great cost to many operators. While the move was a controversial one within the industry at the time, for consumers it was a key step in improving signal strength and reliability. In fact, no matter how fancy your cable company’s equipment gets, there is a good chance that your OTA signal is still of higher visual and audio quality than what comes out of the wall. If you think of your cable signal as a 500 lane highway that funnels into one lane at the end of your road, your local OTA signal is a one lane Autobahn straight home from the grocery store. It’s simply clearer and faster — with one caveat. Just like cable providers, digital OTA broadcasts either have full reception, or no reception. There is no snowy middle ground. To get a better view of what is available for free in your area, check out http://transition.fcc.gov/mb/engineering/dtvmaps/

How you capture that amazing signal has improved too. Gone are the rabbit ears (and yes, metal coat hangers) of decades before. A new crop of super antennas has made the experience easier and better looking than ever. An Amazon or eBay search will quickly bring up many competitors, but my favorite for personal use has been the Mohu Leaf 30

Indoor HDTV Antenna (gomohu.com). It’s as thin as construction paper, and can be placed virtually anywhere in your home. Several people I have suggested this item to have even found success hiding it behind a picture frame. In my set-up, it sits above our entertainment center, completely hidden. The strength/reliability of the signal you will receive is determined by the distance of your home from the station’s transmitter, and the topography of your surrounding area. If you’re within 30 miles of a metropolitan area, chances are that you will be able to get most networks fairly easily with an inexpensive antenna. Greater than that distance, and you may have to adjust to a more permanent setup.  For a hint of what you can expect, and what type of antenna is best for your area of the country, check out this great resource from the National Association of Broadcasters & Consumer Electronics Association: http://www.antennaweb.org/Address.aspx

More than a year and half into cutting the cord, I can honestly say I don’t miss it at all. In observance of full disclosure, I will tell you that my cable provider did lure me back this past fall with a new and improved bundled package. I lasted all of 23 days before I was taking a number at their store, with all of the other lemmings, to return every piece of their equipment. I didn’t need it, didn’t want it, and frankly was sickened by my lack of willpower. I won’t go back. That being said, this isn’t for everybody. If you’re a huge fan of sports, especially college football or basketball, you might find it tough to give up all your premium tiers of focused coverage. There just aren’t alternatives out there right now. You may need to find a friend who likes to throw fall Saturday football parties, or use some of your cable savings down at the local sports bar. You’d probably rather spend $5 on a delicious craft brew, than subsidizing the latest cable start-up anyway, right?

If you do find yourself missing some of the comforts of having 400+ channels at your fingertips, combine your new found free TV access with subscriptions to things like Netflix, Hulu Plus, Amazon Prime, content provider apps, iTunes pay-per episodes and Podcasts. If you have a “smart TV” the transition will be easy. If not, you can transform almost any TV into a streaming device with an AppleTV, Roku, or budget-friendly Google Chromecast. Do some research, and find the best option for your household.

So, open up your world to different forms of content. You’ll improve the quality of the things you watch, and maybe even learn something.

Example of how much I saved over one year:

Podcasts – FREE (Your grandparents sat around a radio and learned about the world. You should too) If you got a taste of podcasting with ‘Serial,’ try out the new offerings from Gimlet Media (Startup & Reply All). You can also check out old episodes of ‘This American Life’ or find a show about nearly anything….and I mean, ANYTHING.

Books – FREE and also great. Go to the library, borrow from friends or splurge once in awhile. I suggest ’10% Happier’ by Dan Harris. It’s a great companion to your new, quieter life.

Annual Savings in year 1: $576, or $985 if you cut premium sport subscriptions, and RedBox/iTunes TV & Movies 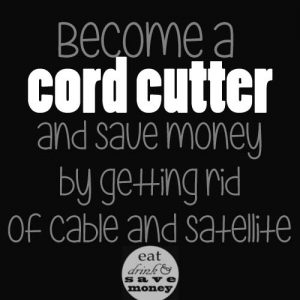 Are you a cord cutter?  Have you thought about becoming one?