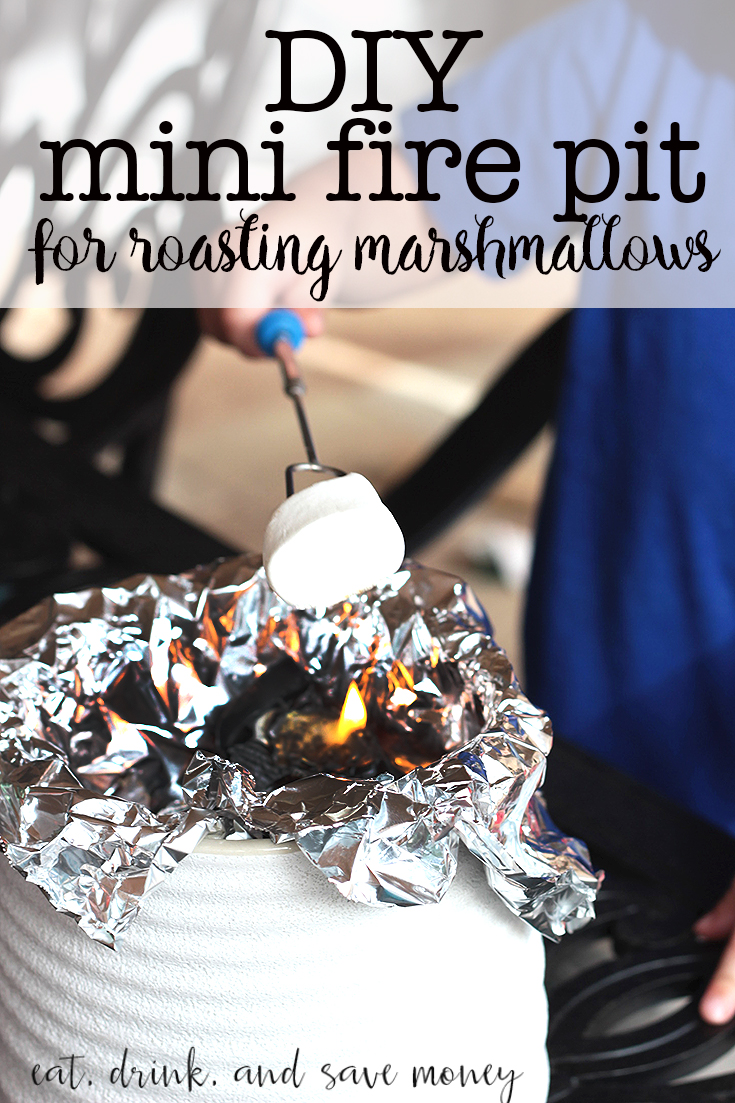 Don’t have a fire pit, but want to make s’mores? Then you have to check out this super easy way to make a DIY mini fire pit. Set it up just in time to make Fourth of July s’mores!

Robert is obsessed with the idea of camping and roasting marshmallows. When we read Curious George Goes Camping, Robert goes on and on about how he wants to roast marshmallows and how he can’t let Jackson touch the fire. 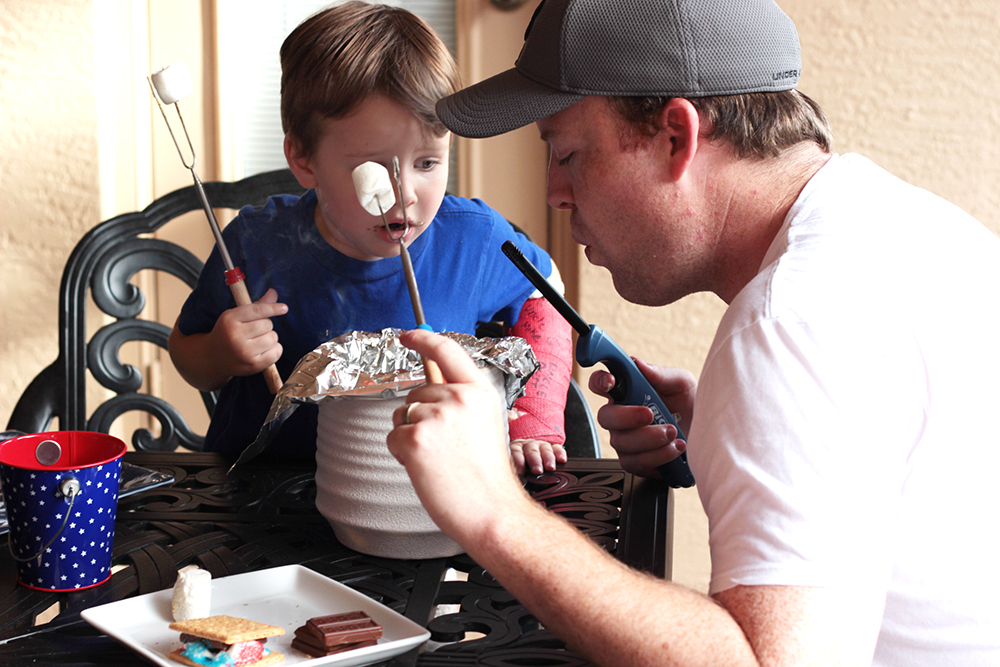 After multiple requests to go camping, I finally caved and told him we could set up a blanket tent in the living room. He promptly informed me that camping isn’t sleeping in a tent, it’s roasting marshmallows. Fine by me! Eating always sounds better to me than sleeping on the floor. 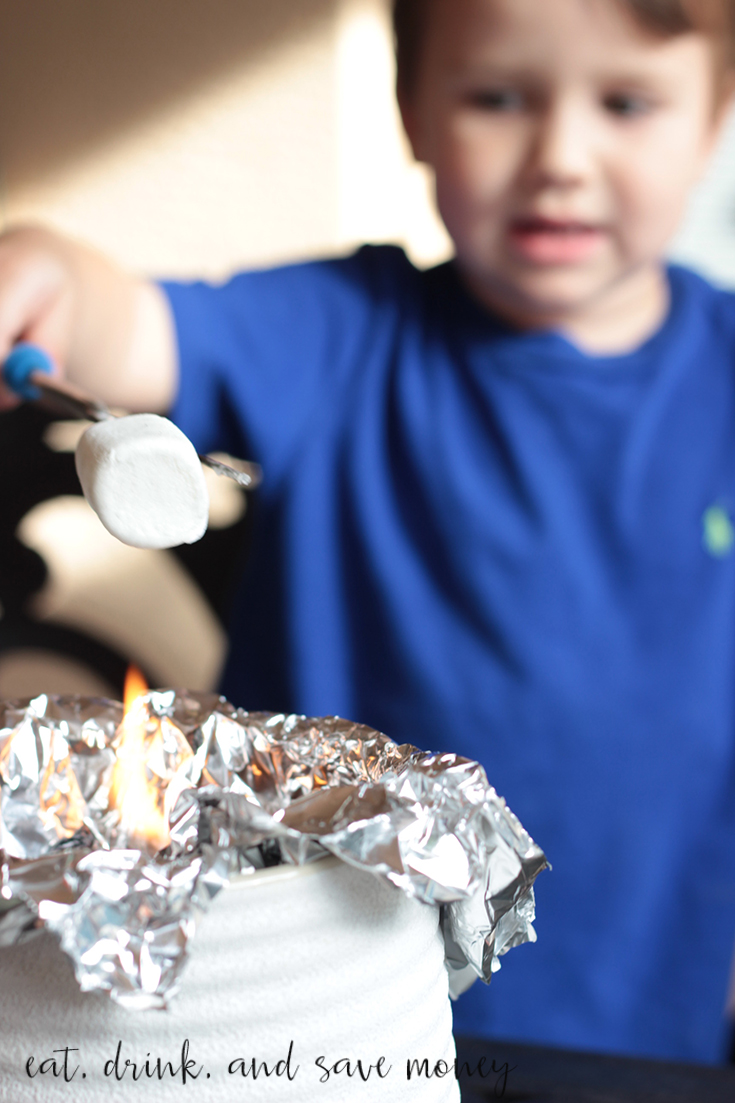 The only problem is that we don’t own a fire pit. Sure, I could make s’mores in the microwave, or on the stove, but it’s not the same, especially to a toddler who has his heart set on seeing fire. I thought about buying one or borrowing one from a neighbor. The issue with that is having Jackson around. The little man likes to toddle all over the place and get into trouble. I’m pretty sure he would get hurt if we put fire on the ground with him. 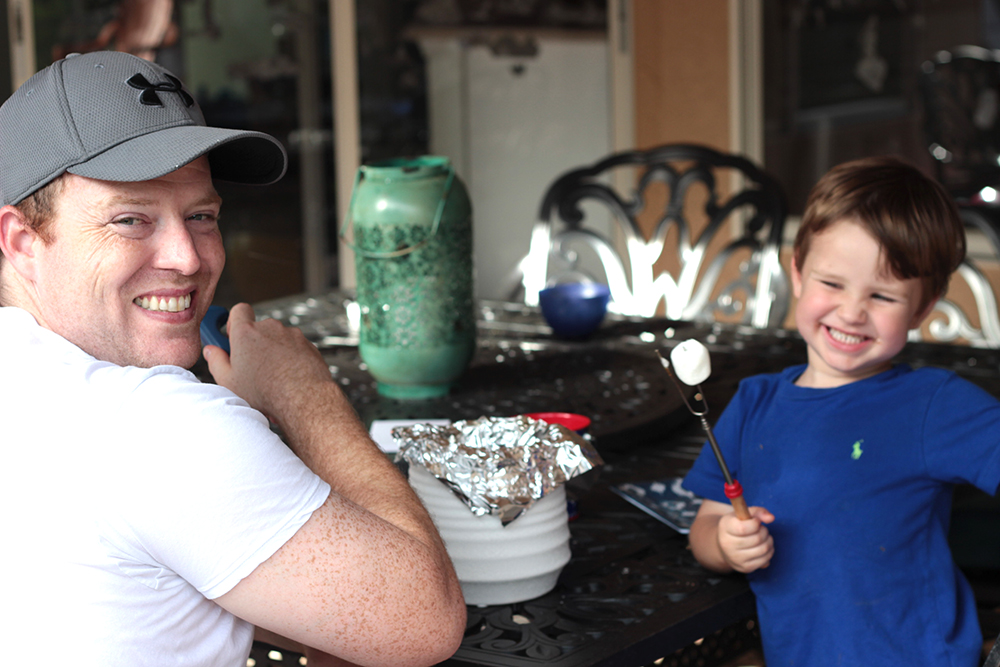 That’s why I decided to come up with an alternative that we could put on the table. This DIY mini fire pit is so easy to put together. All you need is a pot, foil and fire starter. Jackson was safe to play on the ground while the big guys roasted marshmallows. 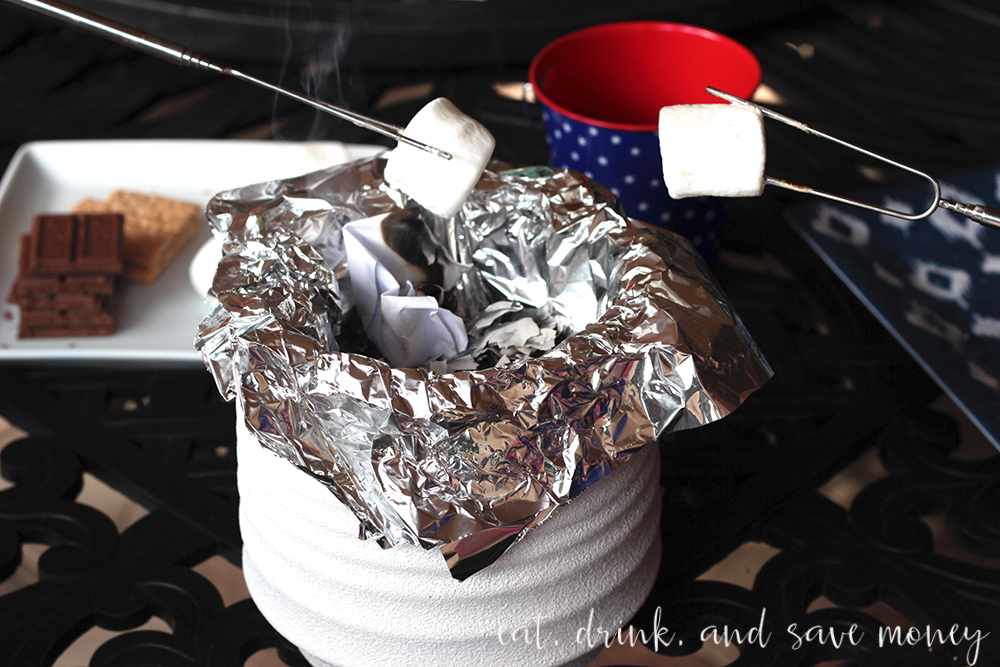 Since I get pretty excited about all holidays, I decided to kick our s’mores up a notch by adding sprinkles. Once the s’mores were complete I put red and blue sprinkles on them to make them Fourth of July s’mores. Watch out world: all of my s’mores must have sprinkles from now on.

Plain s’mores will no longer satisfy me. 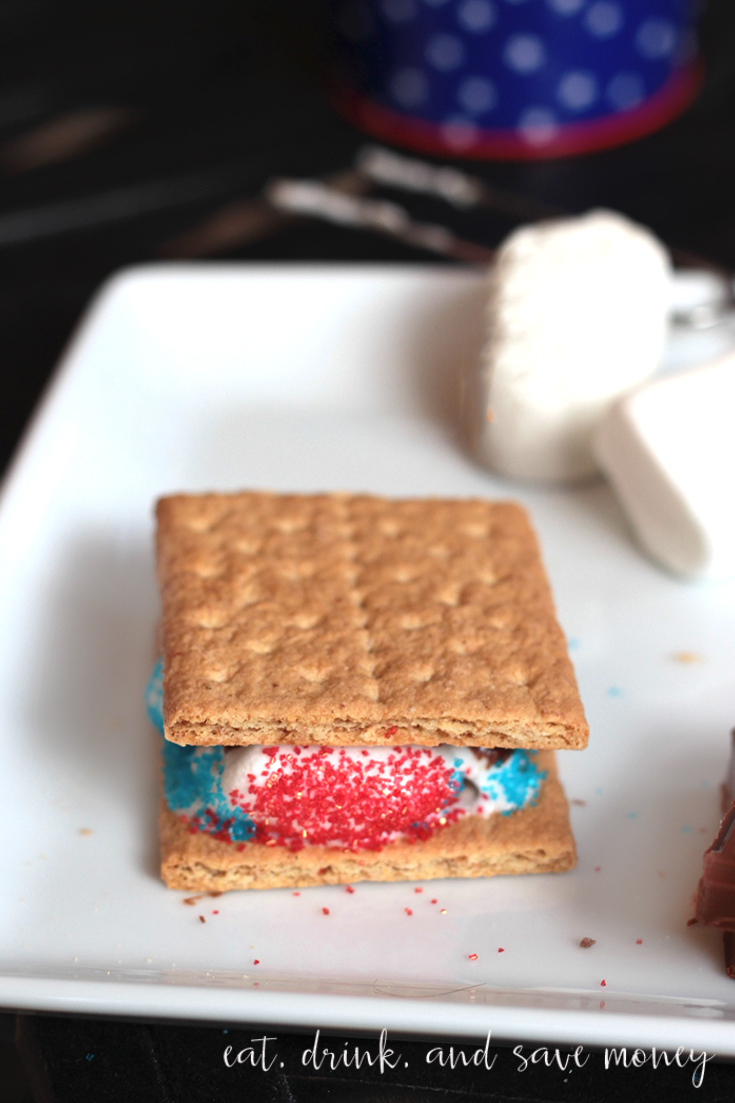 I can’t stop thinking about all the other holidays I can celebrate with sprinkles on s’mores. Can’t stop, won’t stop. Isn’t is fun to see how sprinkles can liven up a regular dish? Or am I spending too much time with kids lately? I am easily entertained. 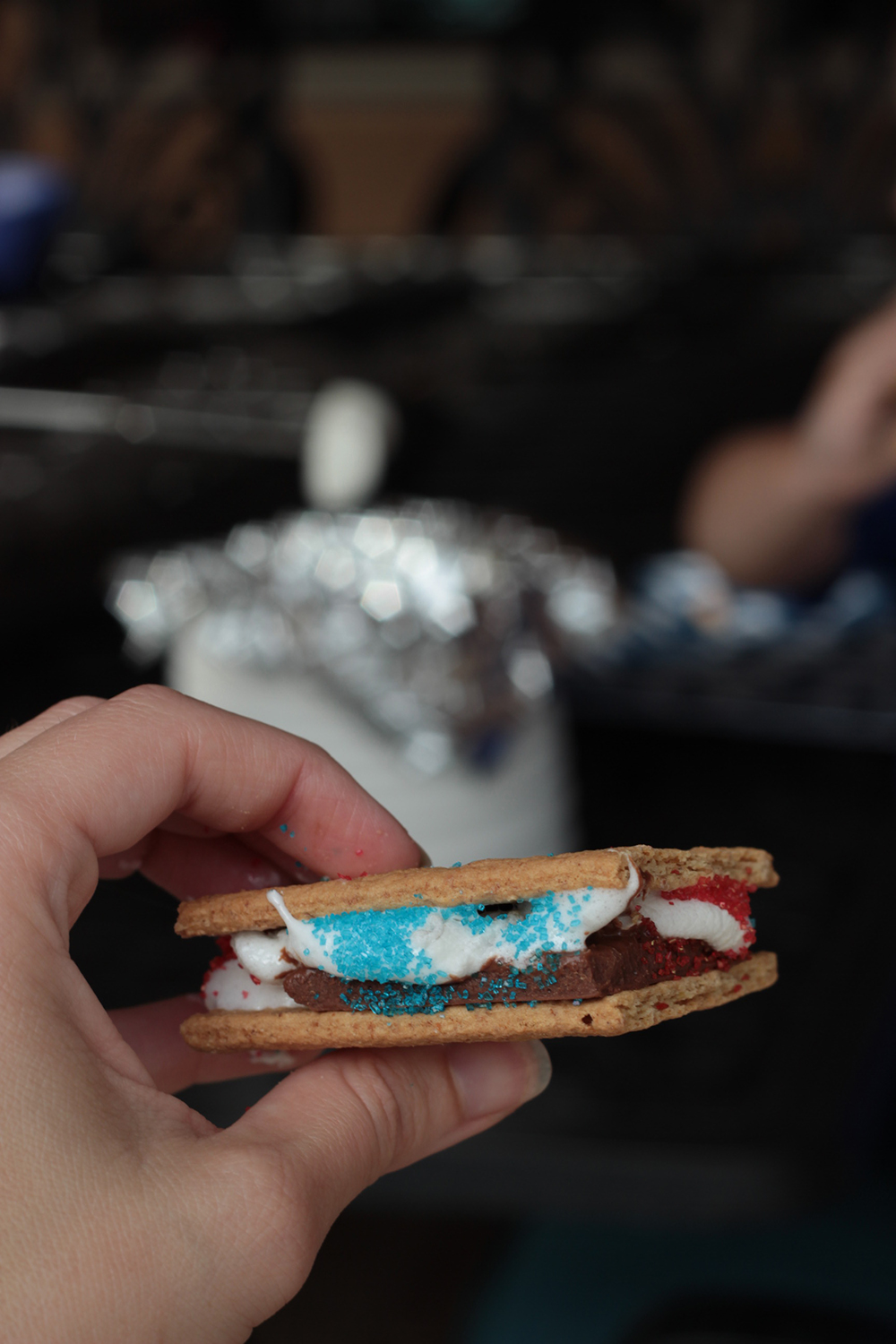 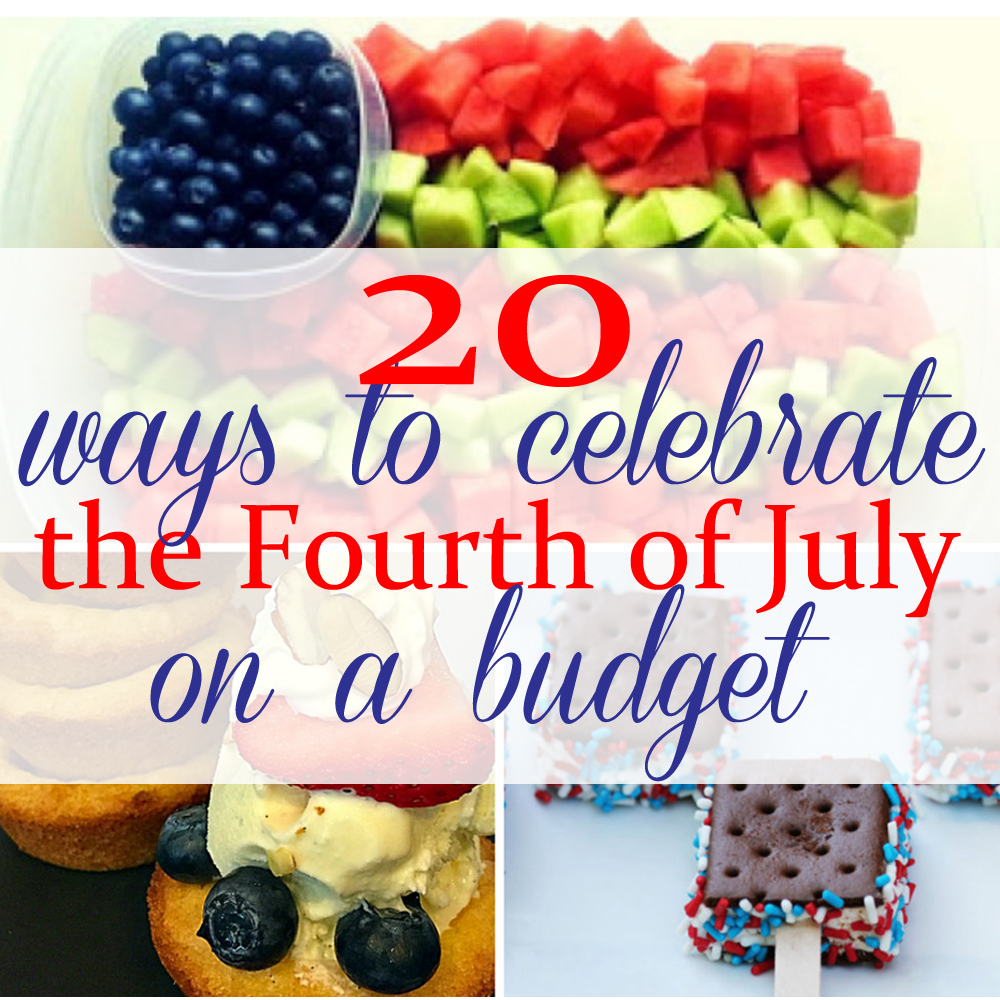 What are your Fourth of July plans?