You all know that Halloween is my favorite holiday, so it should make perfect sense that I’m trying to make sure my kids love it as much as I do.  We’ve had so much fun doing these fall activities for toddlers and preschoolers. 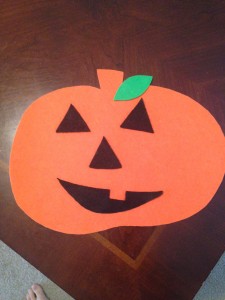 Living in South Florida means we don’t get cool weather for Halloween.  In fact, one year it was so hot that we couldn’t even find pumpkins down here because they kept rotting.  Anyway, 4 years in a row of pumpkins rotting the day or two after carving and I’m finished with carving pumpkins at home.  I’m going to stick with the felt pumpkins for a few years until Robert knows any better.

Robert may not have had as much fun with this one as I did.  Even so, he is having a good time taking the pumpkin apart!  Felt sticks to felt pretty easily so all you have to do is cut out a pumpkin from orange felt and jack o lantern shapes from black felt.  Add a green felt leaf if you want more color and let your toddler change up the jack o lantern faces. 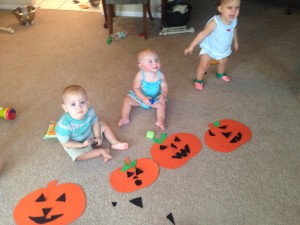 I had originally wanted to cover foam balls with felt so they would look like real pumpkins.  Do you know how expensive that stuff is?  They are $20-30.  Here is my official plea for a Styrofoam ball sponsor.  I get free things for word of mouth marketing every now and then.  Please, Styrofoam ball company, please send me free foam balls. 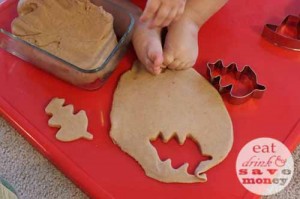 I got this idea from our local Children’s Museum.  Robert loves play dough and the recipe was so easy with ingredients I already had on hand.  I found this recipe by Natural Beach Living on Pinterest. 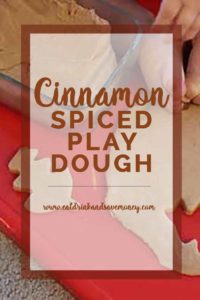 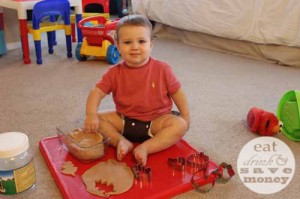 Add all the ingredients together in a bowl, then slowly stir in 1 1/2 cups boiling water (adult job). Mix, let sit about 10 minutes to cool and then it’s ready for play. This can be stored in an air tight container for a few weeks. 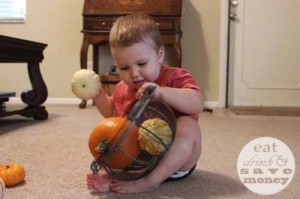 Robert is really into sorting lately, so I’m starting to introduce numbers with his sorting.  I bought a few tiny pumpkins at Trader Joe’s (all of them under $2) and Robert will spend lots of time taking them in and out of the basket.  I especially love that he likes to line them up from biggest to smallest.  Looks like I may be passing on some of my OCD tendencies to him.  LOL. 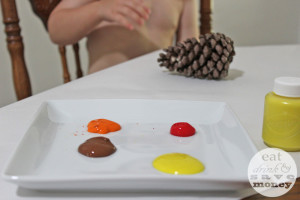 All you need is paint, a pine cone and paper. Go to town and have fun! 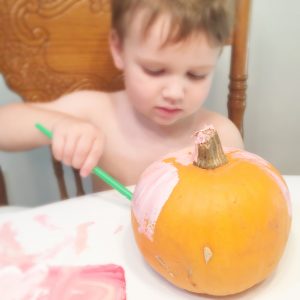 Kids can’t cut pumpkins so let them paint them instead! 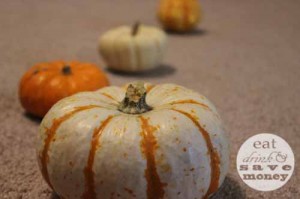 Robert’s story time teacher at the library does a great job with songs.  She inspired me to look up more songs to sing at home and I found these from Everything Preschool.  We have a cut out of a pumpkin to hold during the songs and sometimes we hold the little real pumpkins.

Five little pumpkins sitting on a gate, (hold hands up)
The first one said “oh my its getting late,” (hands on cheeks)
The second one said “there’s a chill in the air,” (hug self)
The third one said “but we don’t care,” (shrug)
The fourth one said “we’re ready for some fun,” (jump)
The fifth one said “lets run, run, run,” (run in place)
So woo went the wind, and out went the lights,
And the five little pumpkins rolled out of sight (sit down).

Put a picture of a pumpkin on the floor and sing:

Ring around the Pumpkin,
Pocket full of nuts,
Leaves, leaves,
They all fall down.

We continued by adding new movements as we danced and sang around a pumpkin.

March around the pumpkin,
pocket full of nuts,
leaves, leaves,
they all fall down.

Stomp around the pumpkin,
pocket full of nuts,
leaves, leaves,
they all fall down.

Tip-toe around the pumpkin,
pocket full of nuts,
leaves, leaves,
they all fall down.

Jump around the pumpkin,
pocket full of nuts,
leaves, leaves,
they all fall down.

What are your favorite Fall activities to do with toddlers?