With the birth of a new baby, I knew this week would be a crazy one, I just didn’t realize how crazy. I never thought we’d be evacuating with a newborn.  Even though we knew Irma was brewing when I went into labor, we had no idea that a week later we’d be evacuees.  Here’s a deviation from my normal blog posts. This is mostly diary style blogging to let you know what it was like evacuating with a newborn and how hard it was to make the decision to leave. 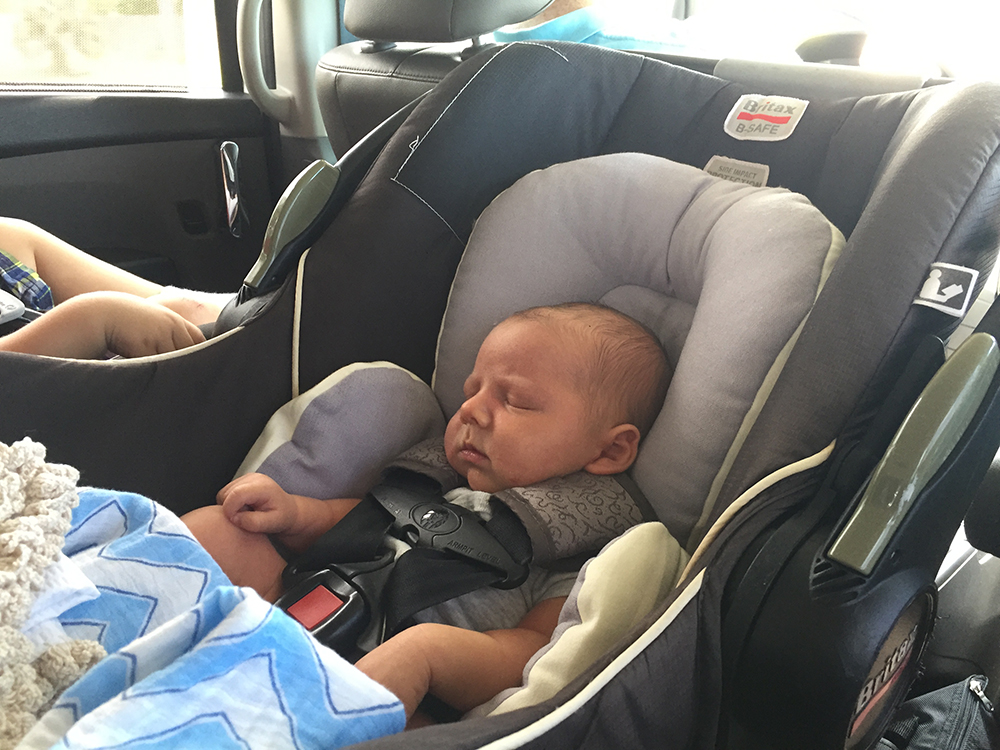 We brought Max home on Monday morning, Robert started 4 year old preschool on Tuesday, and Jackson started 2 year old mom’s morning out on Wednesday. That a big week of adjustments for a family! 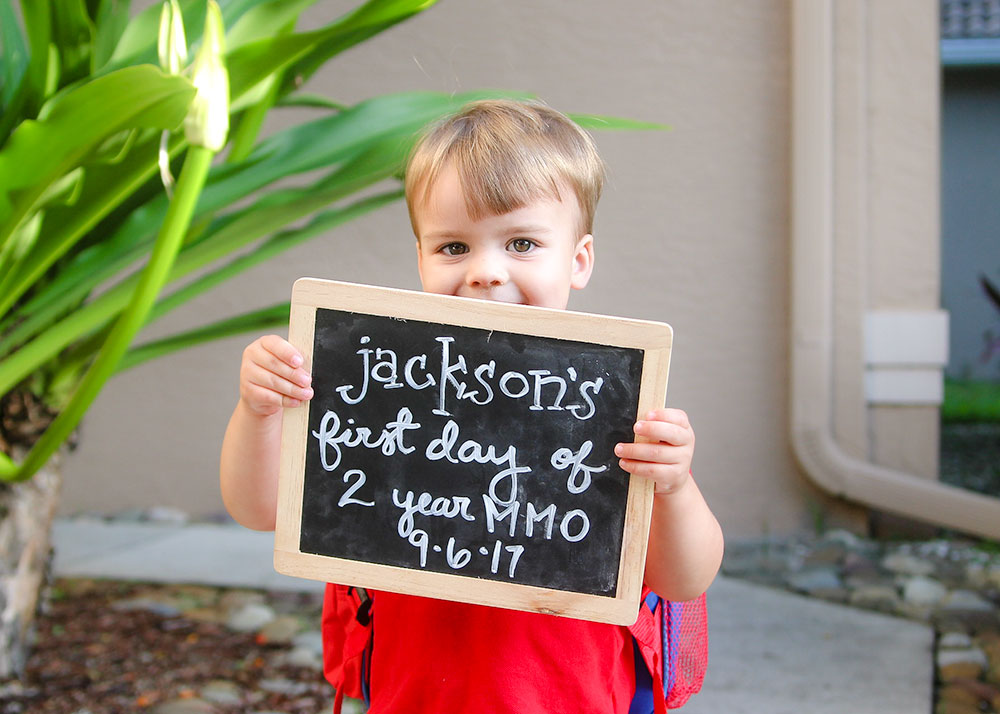 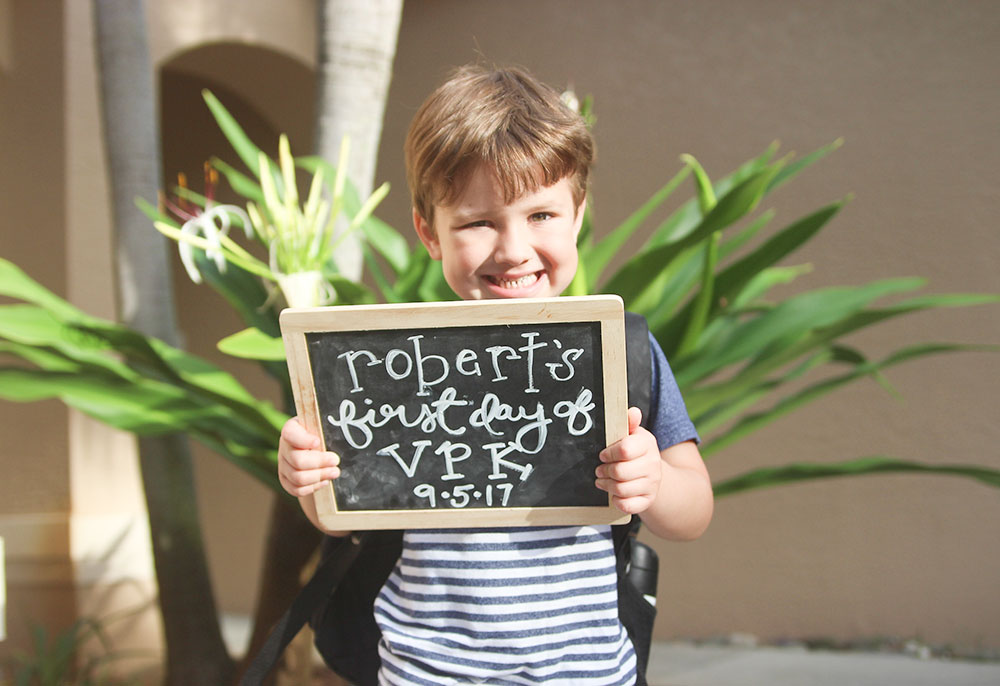 On Monday afternoon it became clear that Irma was heading to FL. As a southerner who grew up on the Alabama Gulf Coast, I’ve seen my fair share of hurricanes. Some have been fun, others like Katrina, have been downright terrifying. Tom and I kept an eye on the storm and decided it was too early to make a decision. After all, hurricane predictions are rarely right.

By Tuesday, people were starting to text and call. Family members were asking us to leave. Tom and I decided we’d book a flight to Atlanta only to realize that it’s super dangerous to fly with a new baby. Not to mention all the flights out of Southwest Florida were already full! All I could handle at that moment was taking care of a 3 day old, nursing, prepping my boys for school, changing my pad, and cleaning my stitches. Pretty much everything else was far from my mind, even Irma. I was too busy making sure these 3 boys were happy. 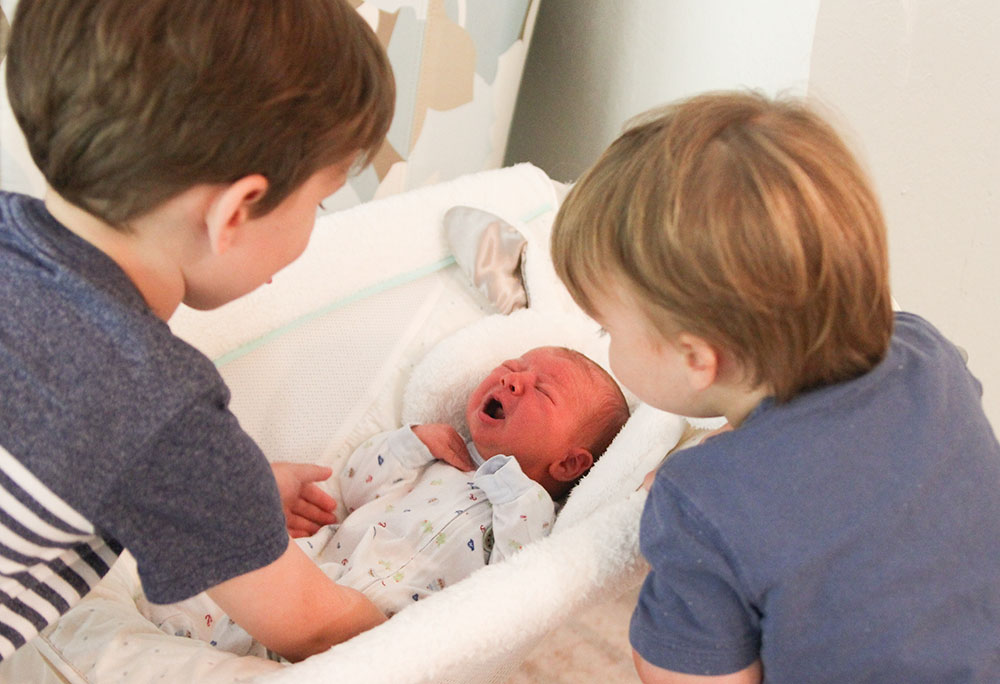 On Tuesday night my husband took care of Max while I had a movie night in bed with the big boys. While I was getting ready to cuddle with them, my mom stopped by. She’d been hysterical about the storm for several days, insisting that we leave ASAP. At the time I didn’t want to make a decision to leave yet. Nothing about taking a road trip with a newborn sounded fun to me.

I didn’t want to stop every few hours to nurse, change a diaper, change my pad, clean my stitches, oh, and take care of the other boys along the way. My milk had just come in so I knew the nights of leaking milk were coming. Not to mention that Max has only had one vaccine. With the other two kids I didn’t take them into public for several weeks, maybe even a month. Now with Max I was going to drag him to another state on the chance that we’d get hit by Irma?

But as I cuddled my boys on Tuesday night I couldn’t shake the feeling that something bad was about the happen. I don’t think I’d quite call it mother’s intuition. It felt more like daughter’s guilt for not listening to my own mother. I love my babies so much. If anything were ever to happen to them, I’d die inside. If I had to enter a burning house to save them, I’d do it. That’s exactly what my mom was trying to do with me. I was worrying her sick by not leaving. My dad had also called several times. He and my step mom had called and texted, begging us to leave Naples.

After talking about the possibilities, Tom and I finally decided we’d evacuate. Even though Tom and I weren’t dating at the time, we hung out together during Hurricane Katrina. We were in Jackson, MS, located 2 and a half hours north of New Orleans. We still lost power and water for nearly 2 weeks.  It was so bad that we had to leave Jackson.  Having been through a situation like that we knew we didn’t want to make our kids suffer through it.

We sent the kids to school that morning, took Max to the pediatrician, and packed up the car. We put down the one hurricane shutter we have, secured all the furniture and toys outside, moved our favorite possession, our couch, away from the window, unplugged electronics, and grabbed enough clothes for 4 days.

In hindsight we left too much. I didn’t even remember to put on my wedding ring. I left all my jewelry, all our important documents, and all of our pictures. While I know I should have packed smarter, I don’t think our van could have fit one more thing inside of it. Traveling with a newborn, a toddler and a preschooler means we have a lot of stuff: diapers, basinet, toys, etc.

We got on the road around 2 to make the 10 hour trip to Daphne, AL where my dad lives.  We stopped at CVS to pick up some proportioned baby formula just in case we couldn’t stop for me to nurse Max. Before we left the parking lot, I had my Lansinoh double pump hooked up to my boobs (thank God for free blogging perks- expect a review soon). Twenty minutes later I had 1 and a half ounces of milk. It was depressing and exciting all at the same time. Cue new mom hormones. 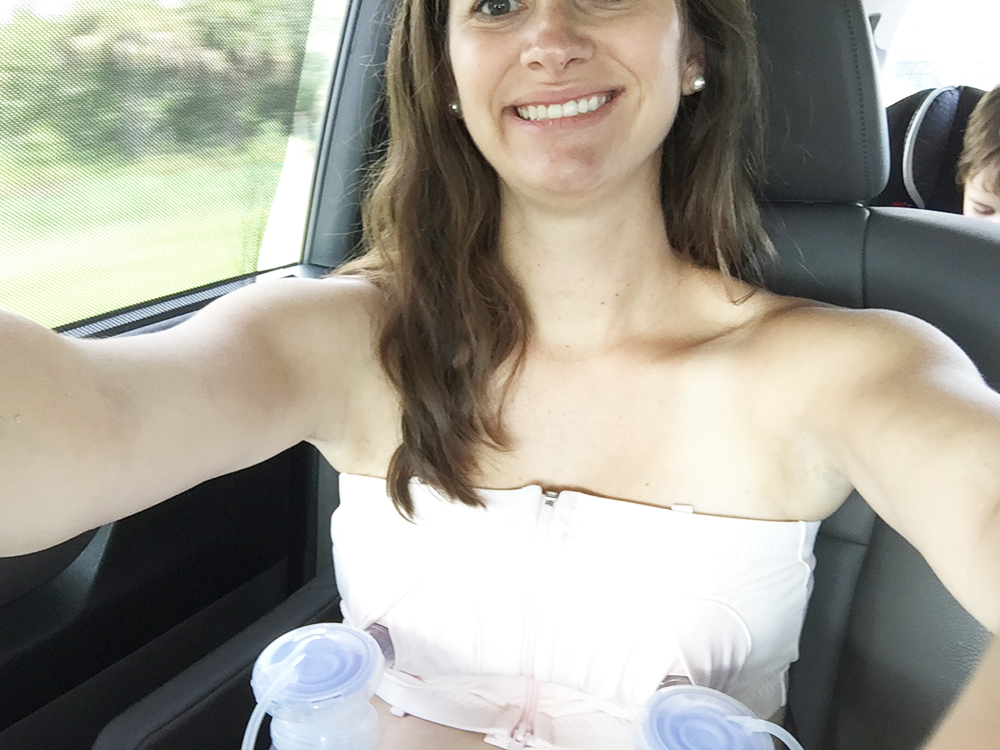 The Waze app helped us stay out of congested traffic and had us going through our old stomping grounds of St. Petersburg around 5:30. Tom was craving Taco Bus so we decided to stop and eat dinner with our good friend Irene. She invited us over to put the boys into pajamas and use a clean bathroom before we embarked on the evening portion of our trip. Let me tell you, it was very nice to  take care of my lady parts in a clean bathroom and then nurse on a comfortable couch.

From there we made pretty good time by using the Waze app and Tom’s common sense of reading maps to stay off of 75. We made it to Ocala around 11 and decided to see if we could get a hotel room. Hotels already had signs on windows saying they were occupied.

We moved on and tried again in Lake City. Same situation.

We kept moving and finally made it to I-10. All along the way we were stopping to nurse, change Max’s diaper, change my pad, and let the boys go to the bathroom. Each pit stop probably took at least 45 minutes. It was pretty depressing to see us make good time only to get behind the clock again and see the hours get later with each stop. I fed Max expressed milk and formula between stops to keep him happy.

At 3 in the morning I was delirious. I’d tried to sleep, but couldn’t rest due to anxiety and my general hatred of sleeping in the car. We stopped at a rest area and ran into my mom, sister, and her boyfriend! Tom got a Mountain Dew and walked around to recharge. I did all my mom duties and we got back on the road.

We tried calling hotels in Tallahassee only to find that they were all booked. I’m sure we seemed crazy calling and asking for a hotel check-in for 4 am!

By 5 am, Tom couldn’t stay awake anymore. We pulled off into another rest area about an hour east of Pensacola for let Tom rest for a bit. Unfortunately 5 am is the perfect time for my boys to wake up. I handed them their Kindle Fires and told them they had free reign. I didn’t even put them on the Free Time app.

My all time low came after I slept for about 30 minutes at the rest area and woke up freezing because I was completely wet. My pad was soaked through and my shirt was wet and cold from leaking breast milk. I grabbed Max and realized he needed a diaper change. I changed him on my lap only to have him pee on me. That’s when I decided I needed Starbucks and I needed it right then. Sometimes mama needs a pick me up.

I woke up Tom and asked him to help me get a change of clothes for myself and for Max. We had a spat because I didn’t describe the bags correctly. The boys were whining because they were hungry. Somehow Max rolled with the punches. Turns out traveling with a newborn is easy. It’s the new mom leaking and hormones that makes it difficult.

Thank God for the Starbucks app that led us straight to the closest one. A tall mocha with soy was just what I needed to feel alive. We recharged and got back on the road, finally arriving in Daphne, AL at 10 am, 20 hours after we left Naples.

My dad and step mom are taking care of us during this crazy time. All I want to do is lay around nursing my new baby and focusing on my own recovery. Luckily I had a vaginal birth with only a second degree tear. I can’t imagine doing this trip after a C-section or with a bigger tear.

We’ve been watching The Weather Channel, catching up on sleep, and exploring my hometown. A little walk on the Fairhope Pier was helpful for Max’s jaundice and also helped the boys get out some energy. 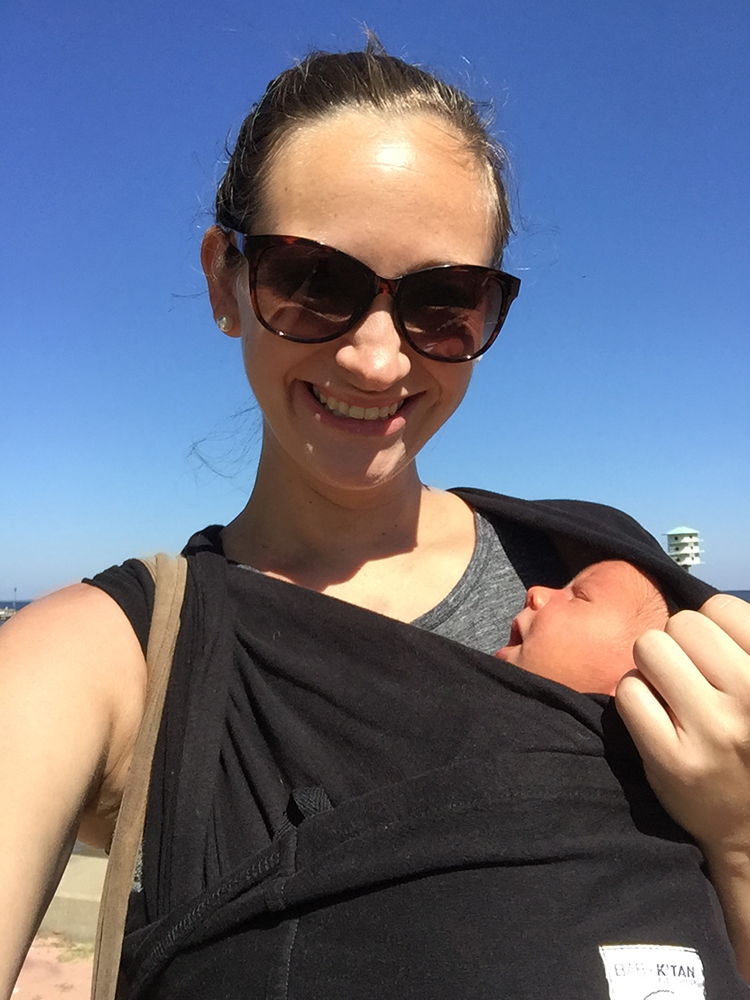 On one hand I’d like to use my status as a travel writer to explore the area more, but on the other hand I don’t want to work. I want to focus on my baby and my family. Luckily work has slowed down for me since I planned to take off some time for Baby Max’s arrival. I still have a few sponsored posts that I have to work on, and it’s going to be super hard to concentrate with so much going on.

Who knows what will be left of Naples after tomorrow. We may be lucky. We may lose everything. I haven’t been sad about losing everything yet. We’ve lost most of our possessions before. I’ve even lost my house before. These things happen. I’m waiting for the moment that my postpartum blues break through and I get super depressed about it all. Right now I must be in shock because it all seems surreal.

Please keep us all in your thoughts and prayers. I feel lucky to have been able to leave Naples. I’m happy that we have money in savings for emergencies like this.  I know several people who didn’t have the funds to leave. Evacuating isn’t cheap. You have to think about gas, hotel rooms, food, etc. Not to mention that most places of work were still open until yesterday. Deciding to leave means taking time off work and losing money. My sister and her boyfriend did just that and I’m so glad they did!

In the meantime I’ll be trying out the new line of Target’s $5 wine to celebrate Max’s first week of life! 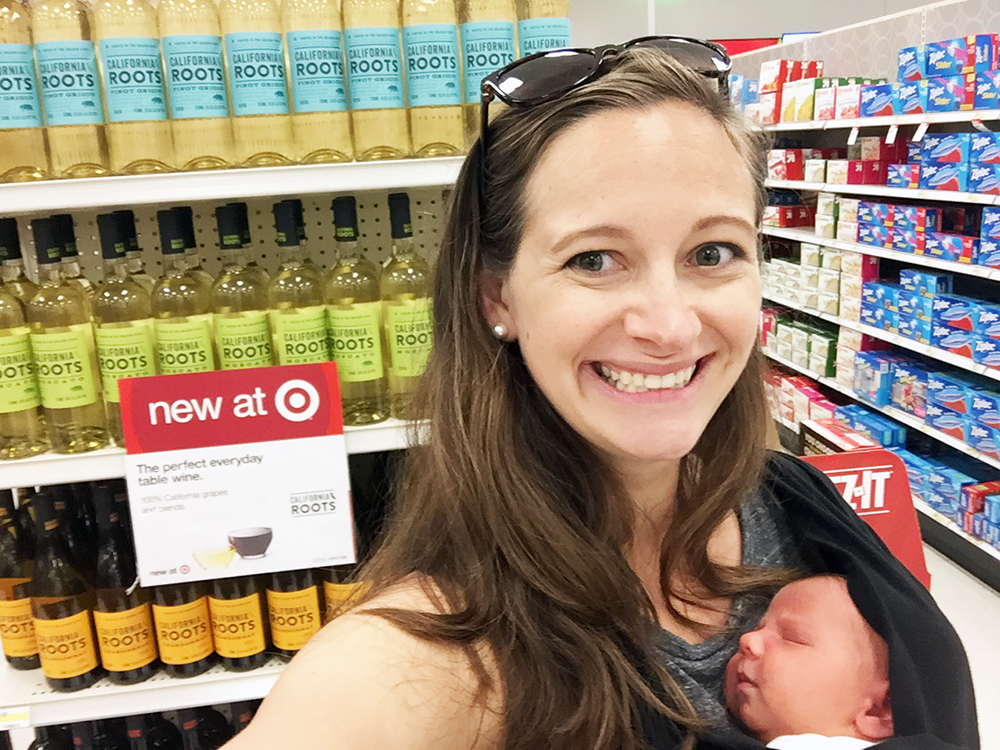 Happy first week of life, Baby Max. It’s been one hell of a ride since you arrived! 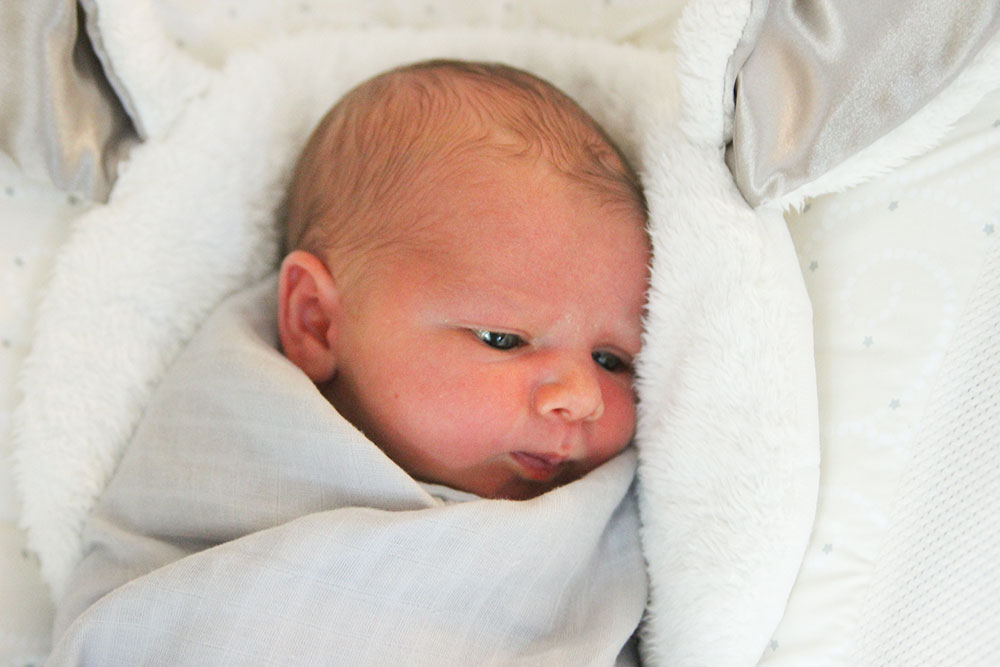