This post is sponsored by General Mills in association with Linqia. As always, all opinions are my own. 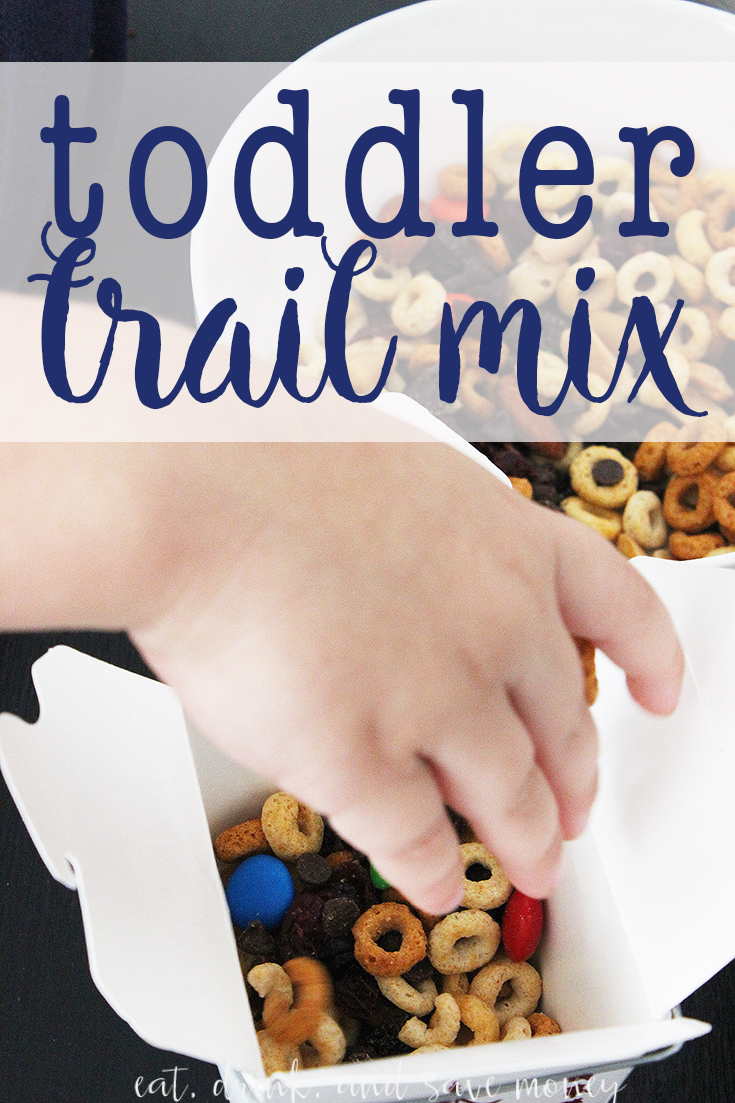 Happy Tuesday. I’m excited to share this fun toddler activity where kids can make toddler trail mix. There is also a $15 giveaway at the end of this post. Don’t miss it!

To all my readers who aren’t moms, I’m sorry for the overload of kid related posts this week. I never intended to be a mom blogger. I promise! I started this blog years before the kids came along with the intent of never being a mom blogger. Whoops. I’ll have to balance out the kid posts with lots of drink reviews next week.

Last week (before the arm fracture- eek) I set out this spread for Robert to make his own trail mix. He had a blast! We used Cheerios, peanuts, coated chocolate candies, chocolate chips, raisins, and dried cranberries. 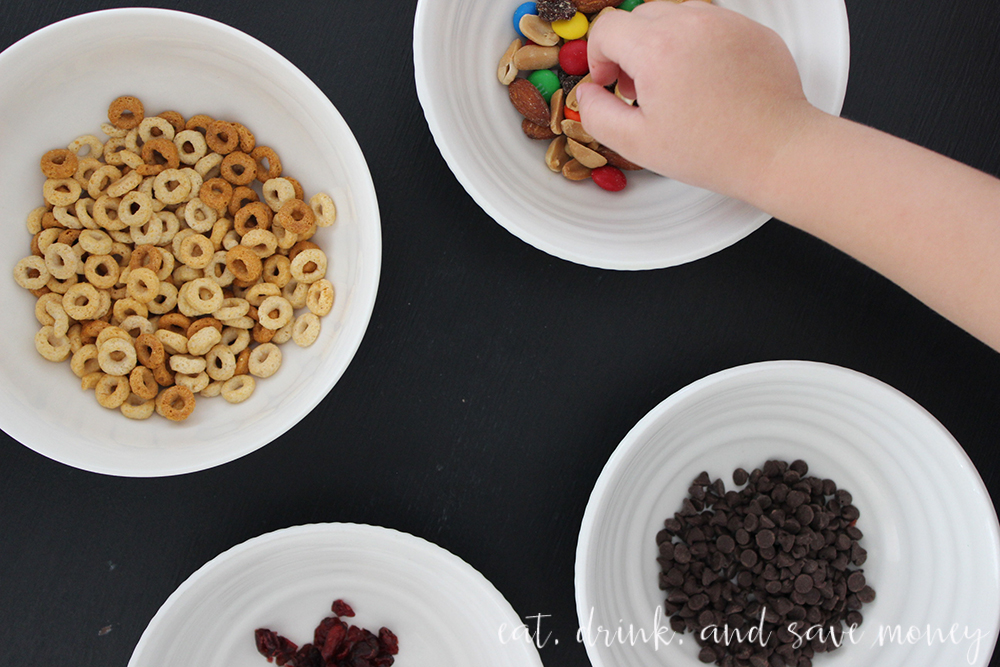 I made Multigrain Cheerios the hero of this trail mix because it’s a long time favorite of my kids. I hate spending a lot of money on prepackaged snacks so I’m constantly using Cheerios as a toddler snack. It was fun to add mixings to it and make it a little more fun. 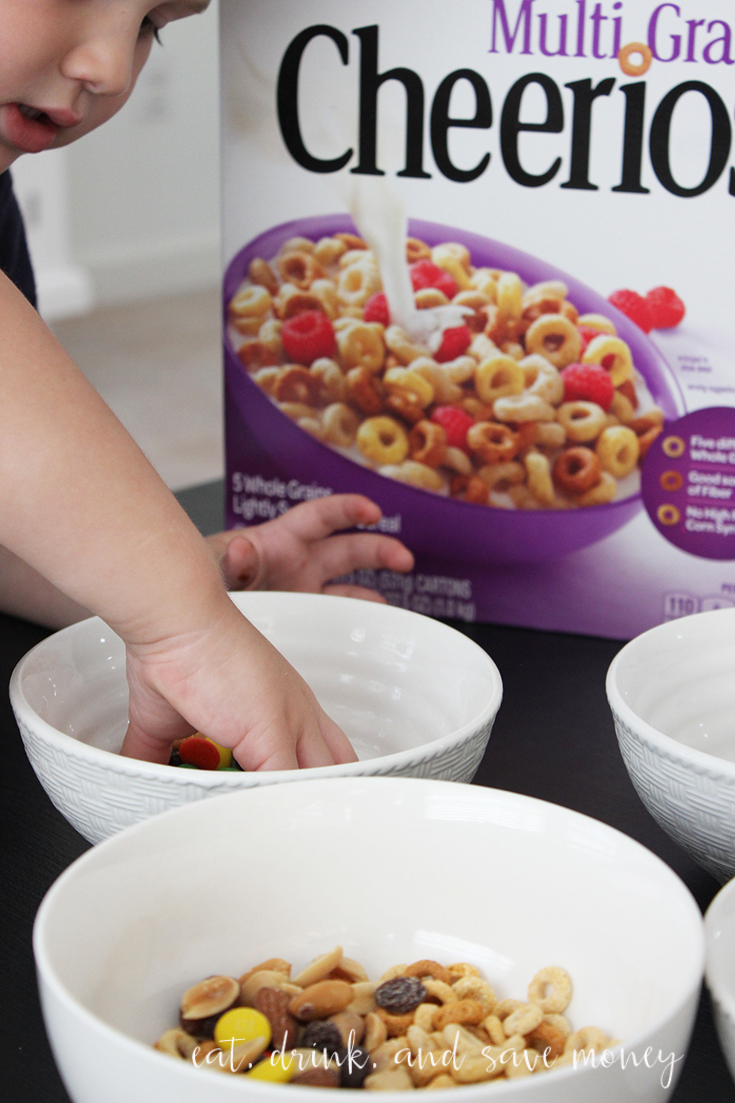 I save tons of money by using Cheerios as a snack instead of buying highly processed toddler snacks. To make it even cheaper, Publix is offering a $1.00 off 2 boxes of General Mills Cereals coupon. Click here to get it! 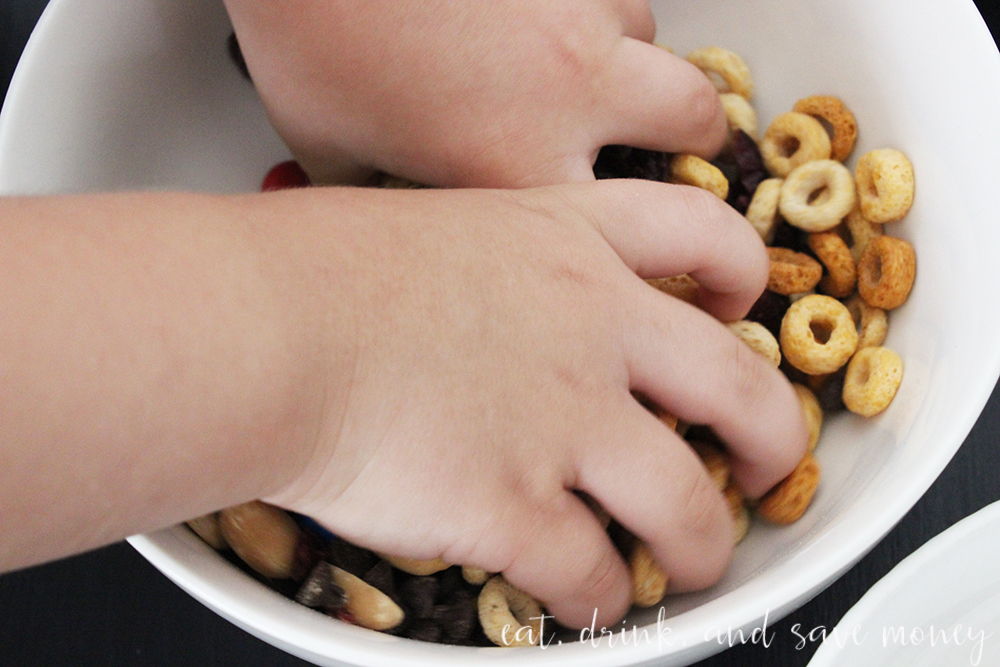 Robert very much enjoyed making his own trail mix. He felt like he was doing something super special since he was able to make his own mix, while baby brother had to have plain Cheerios. It’s always fun to do something just for the big brother. 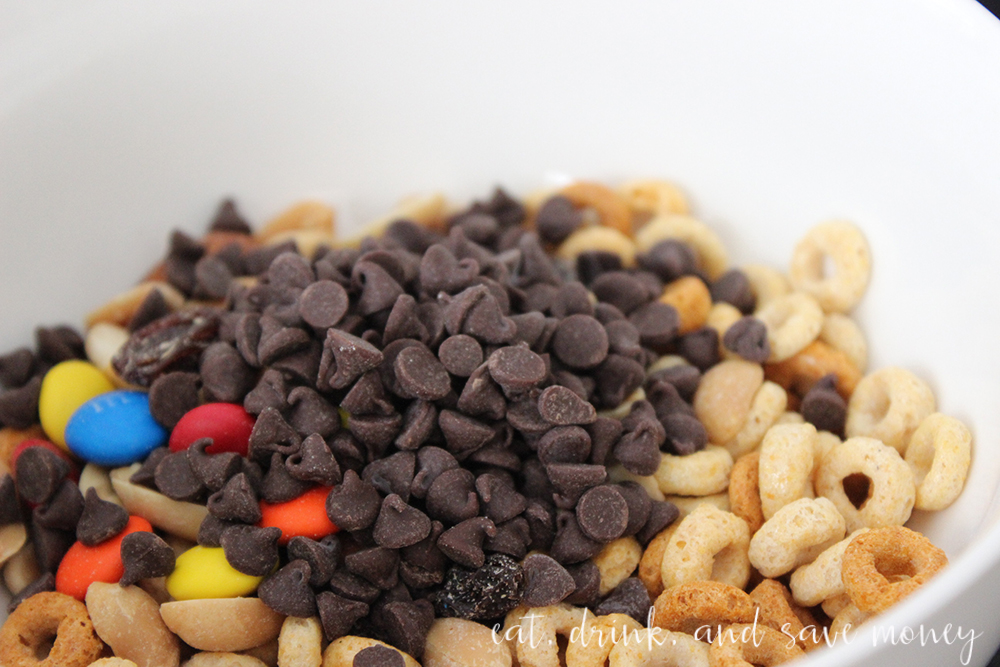 I tried to make it even more special by letting him put the trail mix in a clean take-out Chinese container. He loved carting around his snack in something other than a snack cup. He even called my husband and told him all about his “mix”. 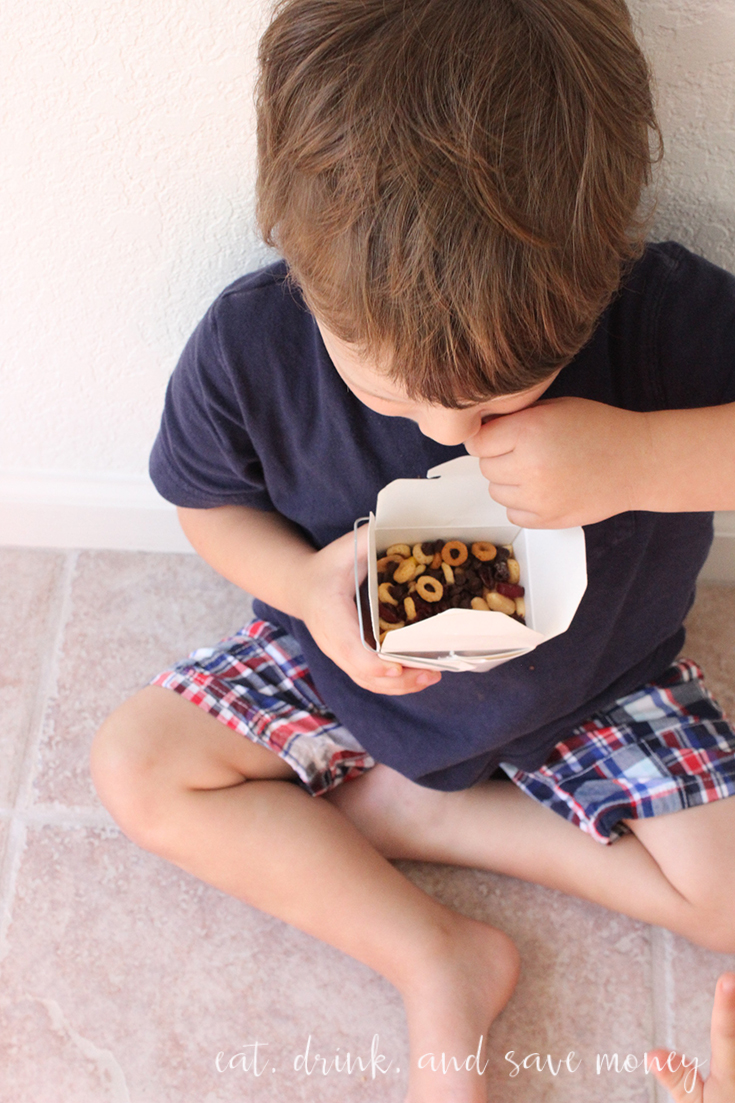 Jackson really wanted in on the fun. He kept following Robert around begging for Cheerios! 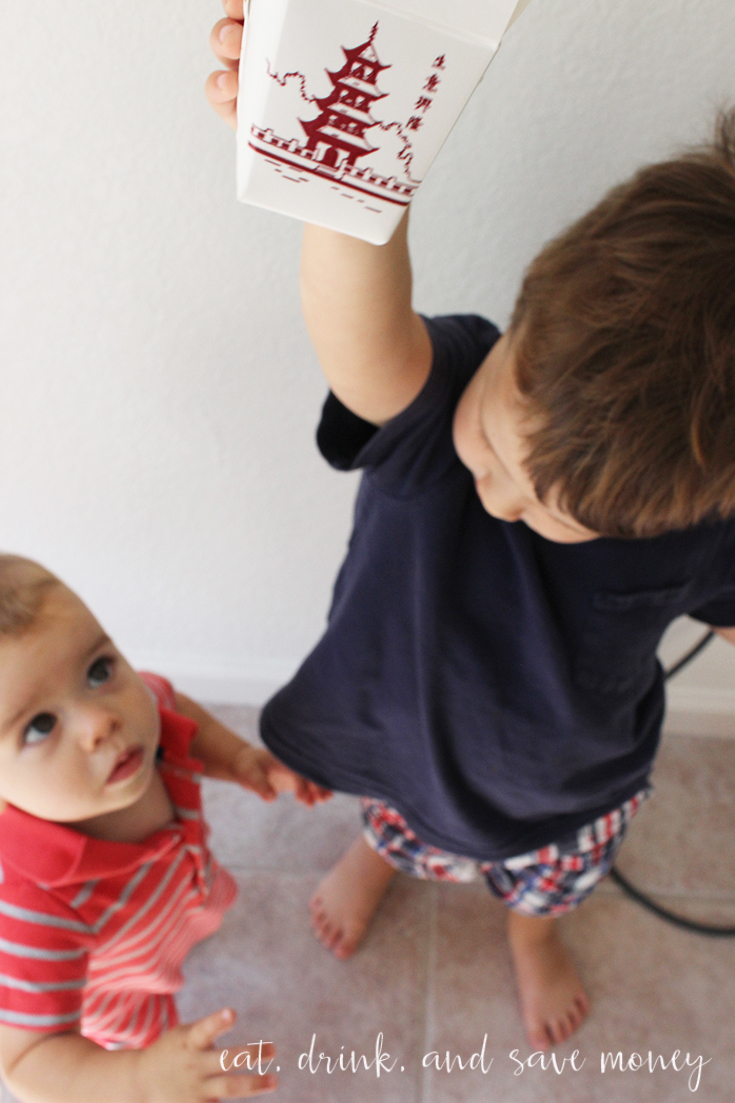 Everyone can now enjoy the awesomeness of General Mills cereals because they just recently switched to gluten free! It’s never been an issue for my family, but I love that I can offer Cheerios to our gluten free play date guests now. Are you Cheerios obsessed like me? 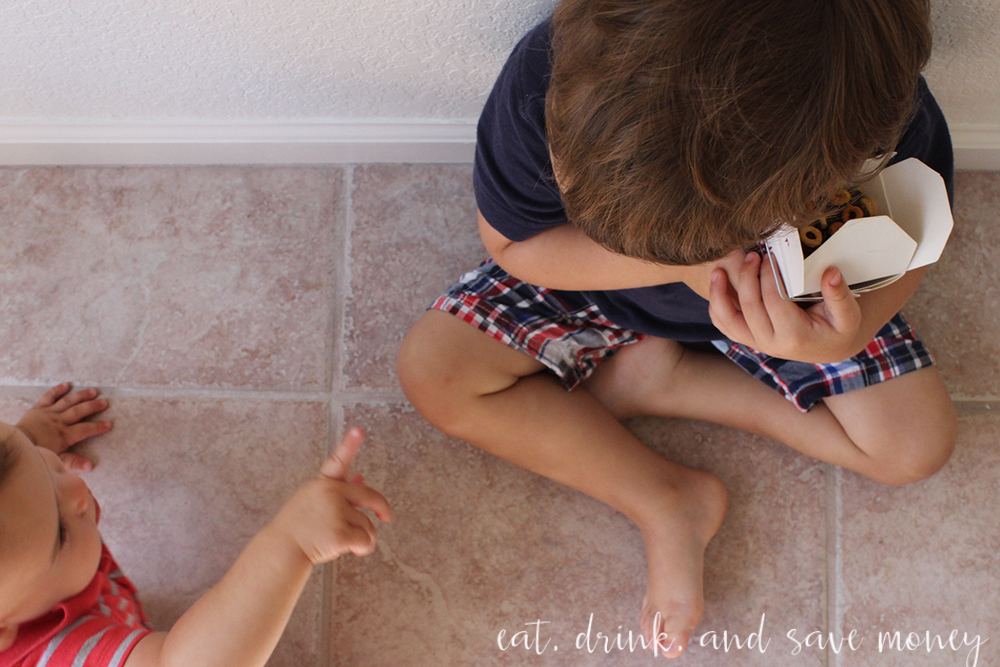